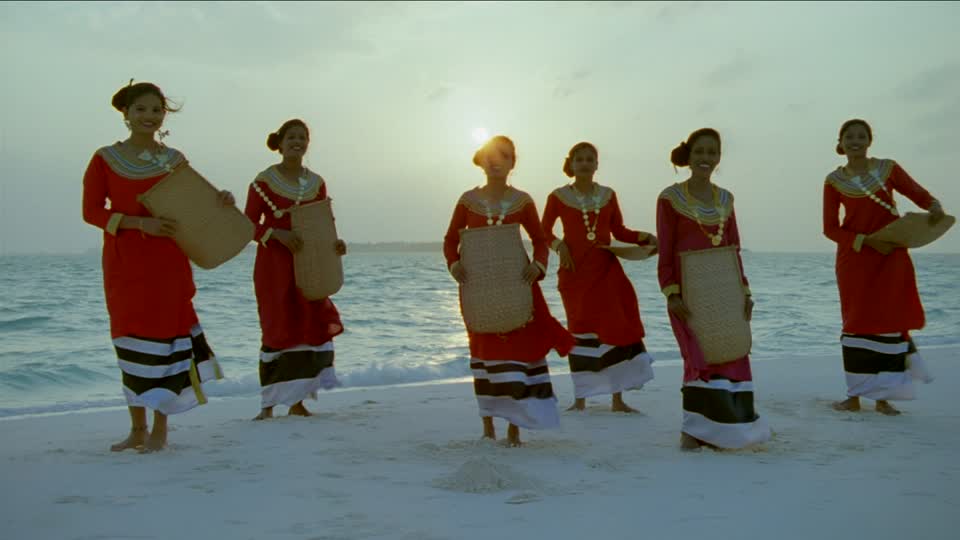 Bodu Beru: Bodu beru is one of the most popular forms of folk music and dance in Maldives. Participation in Bodu Beru folk music transcends the barriers of age. In Bodu Beru, there is one lead singer and a band of 10-15 people, who sing in chorus and play an assortment of percussion instruments. As the song continues, the rhythm picks up and people come out of the troupe and dance to the tunes of the music. Spectators join to clap and dance. Bodu beru is a tribal dance that usually takes place during most festive occasions. The date the dance was introduced to the country by African slaves from East Africa ranges from the 12th to the 19th century. (Kirsten Ellis and Sansoni 1992)

During the reign of King Mueenuddeen I these slaves were liberated and sent to Feridhoo in Alif-Alif Atoll. It is believed that Boduberu spread out from there to become one of the most popular forms of entertainment in the country. The musical instruments that are used consist of three or four drums made from hollowed coconut wood made in the form of small barrels with both ends sealed with goat hide or manta ray skin.

Bandiyaa Jehun Dance: Bandiyaa Jehun is a popular dance form that takes place in the Maldives Island. Much like the Indian pot dance, women carry metal water pots as props to sing and dance to the tune of music.  Performers sing and dance to melodious tunes while taping the rhythm on the pots with rings worn on the fingers. Usually, women wear a long skirt and a blouse called Dhigu hedhun. Over the years the dance form and the accompanying accessory have been modified.

Bolimalaafath Neshun Folk Dance: Bolimalaafath Neshun is performed by women. It represents the old tradition, when women used to offer presents to the Sultan on special festive occasions such as Eid. Usually, the gifts basket, which consists of shells, is kept in a small beautifully decorated vase called Kurandi Malaafath. The women carrying thevase also wear brightly colored dresses. The dance usually has about 24 performers.

Dhandi Jehun Folk Dance: Dhandi Jehun is a popular dance form performed by a group of around 30 people. The dance style differs in each atoll. The dance consists of a lead singer, who usually sings the “Thaara” songs or “Unbaa” songs, while other group members sing in chorus and dance to the beat of the song. Each performer holds sticks called Dhandi, which he strikes to the Dhandi of the performer facing him in accordance to the beat of the music. Women performers use shorter sticks and move to faster beats, the men use only one piece of stick which is about three feet long and move to slower music. This is mostly performed to celebrate festive events such as Eid and other national occasions.

Kadhaa Maali Folk Dance: This dance form only survives in Kulhudhuffushi in the south Thiladhunmathi atoll. Kadhaa Maali is initiated by beating of drums, and a Kadhaa –consisting of a copper plate and a copper rod. The dance is associated with the warding off of evil spirits associated with terrible sickness and epidemics prevalent in the island community. About 30 men dressed in different costumes dance to the drums. Their garments exhibit various ghostly figures and evil spirits. It is these ghosts or the evil spirits that are addressed as “Maali”. The dance did not develop in isolation. Traditionally, a congregation of the elders of the island would practice a late night walk around the island to ward off the evil spirits. The midnight walking usually began after the late evening prayer, and would continue for three consecutive nights and on the third night as to mark the end of the working the island community would engage in different types of music and dancing. This ritual was a prelude to Kadhaa maali.

For more information on the dance form of Maldives please visit the following sites:
http://www.letsgomaldives.com/maldives/music-dance.html