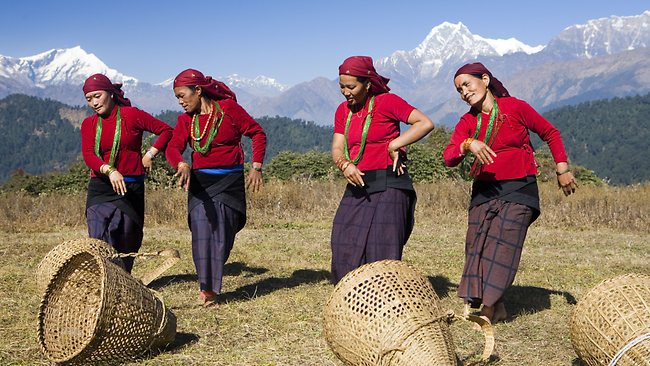 Mahakali Dance: is one of the popular dances of Newar community in Nepal. This dance is based on the religious story from a Hindu Puran: ‘Mahakali Mahalaxmi’. This dance demonstrates the great joy and happiness after the victory of mother goddess over the demons.

Lakhey Dance: is one of the classical dances of Nepal performed once a year during the festival of Indrajatra which is celebrated for nearly a week during the end of September or first part of October. ‘Lakhey’ according to popular belief refers to man eating demons living in the dense forest. Earlier, Lakhey dancers used to select victims for human blood sacrifices.

Monkey Dance: is performed by teenagers wearing traditional customs and sticks in their hands. According to the religious epic Ramayan, monkeys performed a dance to express joy and happiness after victory of Ram over the demon King Ravana.

Bajrayogini dance: is one of the classical dance forms of Nepal named after the goddess Bajrayogini performed particularly in Buddhist temples on special occasions. This dance demonstrates a beautiful blend of wrathful feelings and peaceful motions to depict a strong sense of protection and preservation.

Tappa Dance: is a popular folk dance in the Rapti zone, especially Dang district. This dance starts in a slow key and the tempo gets faster and faster towards the end based on the rhythm or beating of the Madal (hand drum).

Sorathi Dance: is popular dance of Gurung. The central figure in this dance (a male dancer represented as a Jaisinge Raja-the name of a King) dances in turn with other female dancers, that represent the sixteen queens of the Raja and two other male dancers with their drums. Madals are used to provide the background music and settings.

Newari (Dhime) dance: is performed by the Newar community during harvest seasons, and its origin can be traced back to the Malla period of 13thcentury. Dhime is their musical instrument (like a drum which is played on both sides with hand and sticks), and has great cultural significance.

Tamang Selo: is performed by Tamang community, which is the largest Tibet-Burman ethnic group of Nepal. It is performed by both men and women, accompanied by ‘damphu’, a traditional instrument. Young dancers take this opportunity to choose their life partners during Tamang Selo.