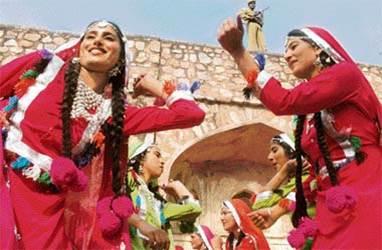 Although Pakistan’s link to the world of dance has always been strong, it is this art form that has suffered the most during the decades of political uncertainty. Under Genreal Zia-ul-Haq’s drive of Islamisation of society he disbanded the Arts Councils, the National Performing Arts Group, and banned dancing by women on stage. (Kermani, 2010) Yet the dance in Pakistan has survived and is making a come back. A number of dance academy exists, these teach both classical as well as western dances. TO read more please click here.

Pakistan has had a rich tradition of dance, both pre and post-independence. Dancers like Zohra and Kameshwar Sahgal, Ustad Ghulam Hussain, Amy Minwalla, Parween Qasim, Nighat Chaudry, Fasih ur Rahman and Tehreema Mitha are custodians of the rich tradition of Pakistan.  To read more dance in Pakistan please click here.

Some of the classical dance form in Pakistan are:

Bharatanatyam has a highly stylised and sophisticated technique has a geometric quality both in its form and in its spatial choreography.

Kathak is a whirling dance. ‘Kathak‘ was a storyteller who incorporated poetry and dances – syllables ‘bols’ into her/his stories. Though Kathak was a pre-Muslim dance, it was patronized by the Mughals, when it became a court dance. In this style, the emphasis is on Layakari, footwork and lightning pirouettes.

Odissi traces its origins to the posture of the dancing figurine found from the ruins of Mohenjo-daro, however it derives its name from the Indian state of Orissa where it was practiced and perfected. It is a rhythmical, swaying, lyrical and powerful dance, recreated on sculptural evidence.

The classical dance forms in Pakistan are similar to that of the larger South Asia. Besides the classical forms there are also a number of folk dance in Pakistan. Folk dancing is an expression of joy done by the masses on special events and days. Some of the more popular folk dances are: