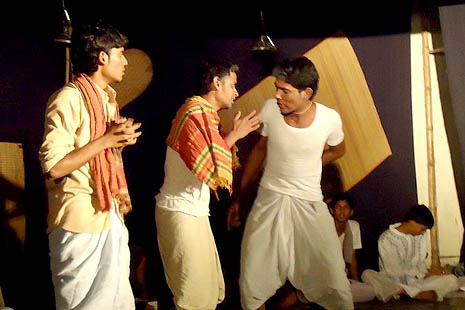 Drama remains popular in Bangladesh, including performances of play by local playwrights, as well as adaptation from writers of Western origin. Popular theater groups include: Dhaka Theatre, Nagarik Nattya Sampraday and Theatre. For more information on the theater groups in Bangladesh please click here. http://www.banglapedia.org/HT/T_0146.HTM

Bailey Road in the capital widely known as Natakpara has been centre of our theatre practices as well as theatre performers. The Guide House and Mahila Samiti Auditorium are situated here.
Dakha is the centre of much theatre groups in Bangladesh. Drama and other art form were also introduced in the recent decades in the university system. Department of Drama and Dramatics was established in the University of Jahangirnagar. In 1989, Theatre and Music Department was introduced in the University of Dhaka. Then, Chittagong University launched studies on Theatre under the Department of Fine Arts.

Jatra, that is, folk drama, is also a part of culture of Bangladesh. In Jatras, legendary plays of heroism, mythological stories, folktales of love and tragedy, and similar countless themes are enacted in open air theatre, and continue to be a popular form of entertainment, in spite of modern influences.

Puppets shows are also very popular. People watch Drama on the numerous television channels in Bangla or listen to radio programmes that have drama shows.