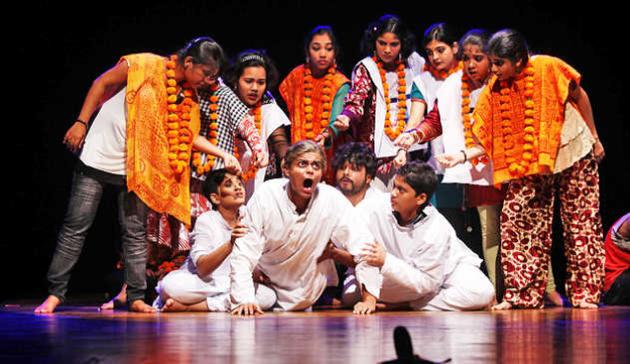 The roots of tradition of Indian Drama is the religious rituals. Two forms of drama has emerged from this religion and social conjunctions: folk-drama, and classical drama.

The rich-hertitage of drama in India can be traced back to the Sanskrit playwrites like Bhasa, Kalidas, Bhavabhooti, VIshakhadutt, Bhattnarayan, Shudrak, and Shriharsha. Plays that deal with mythologies are staged in temples and religious festivals; Ramlilla being a particularlly favored play during Dusshera festivals.

While classical drama found patronage among the socially powerful and economically well to do. The common man of India always had folk-theatre to entertain and educate him. The language of the folk-drama was the common toungue, and the theme were always some relatable by the common man.

Theare in India has gone through periods of rise and fall. Rajnee Vyas contends that, “during the middle ages when the classical performing art was in wither an infantile stage or dormant condition, folk-there was the only medium of popular entertainment. However …income-oriented professionalism led to vulgarism creeping into the presentation. It was during this period of decline in the Classical and folk drama that occidental theatre found space to establish and thrive in India.

Theatre , espeically Hindi theatre, was revitalized by the Indian People’s Theatre Association (IPTA)- Bharatiya Lok-Natya Sangh established in 1942 by Kamaldevi Chattopadhyay. The IPTA was on the “path of progressivism