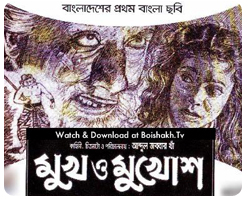 The Bangladeshi film industry also known as Dhallywood, a portmanteau of the words Dhaka and Hollywood, is based in Dhaka, since 1956.

It was on the 24th of April 1898 that Dhaka saw its first bioscope at The Crown Theatre located at Patuatuli near Sadarghat. By 1947, there were over 80 cinema halls in Bangladesh. Yet, it was only in 1953-54 that The East Bengal Provincial Govenment of newly created state of Pakistan took initiative to start a film division. But by the time the film division was set up feature films like the The Last Kiss (1931), Salaam (1954) and Mukh-O-Mukhus (The Face and the Mask, 1956) were produced and screened to highly receptive audiences.

In 1950’s the movie industry in East Pakistan has laid the foundation for more creative work that was to follow. In the 1960’s the style, presentation, subject, and business of the movie industry entered an era of professionalism. The movies were made in the Urdu, the official language of Pakistan, and mostly used folk tales as story inspiration. Movies like Kakhono Aseni (Never Came), Kancher Deyal (The Glass wall), Talash (in search), Roopban, Kagozer Nouka (The Paper Boat), Bhaiya (Brother) dominated the screens. By the end of the decade over 30 feature films were being produced per year by the industry. It was also in the 60’s that the movie industry found recognition in the international movie circuits: Subbash Dutta’s Shootrang (Hence) was acknowledged at the Asian Film Festival of Frankfurt in 1964, while his Abhirbav got a special award from the Queen of Cambodia.

1970’s brought with it great changes. The liberation of Bangladesh, and the liberation war provided a new zeal to the movie industry. In 1970 Zahir Raihan’s Jiban Theke Neya (From the glimpse of life) was the first cinema to tackle a political subject along with love romance and family drama.

Fantasy ruled the screens in the 1980’s. It was also during this decade that short film’s started to appear. Agami (Future) based on Bangladesh liberation war made by Murshedul Islam was adjudged the best movie at the Indian International Film Festival. New Delhi.

For a more detailed history of films in Bangladesh please click here.