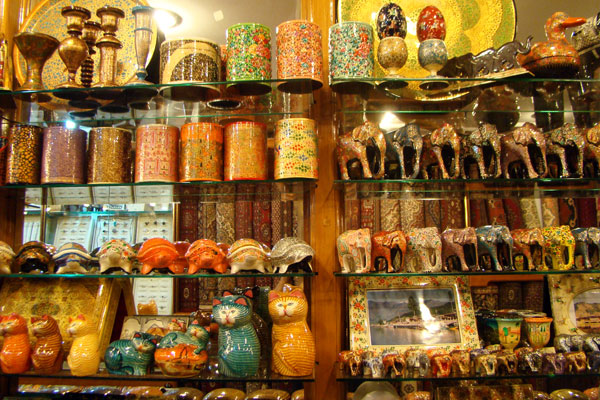 Handicrafts are an integral part of India’s social nad economic fabric. Besides being objects of dedication, craftsmanship, and national heritage, these also provide millions with their livelihood.

Handicrafts in India varhy from one region to the other. Presented below are glimpses of some:

Cane and Bamboo: Cane and Bamboo have been used to make various objects of utility like baskets, mats, boxes, and trays. Brasketry is primarily a folk art. The North-Eastern states are renowned for articles in cane, bamboo, and grass. Hill tribes like the Kukies, the Mikris and the Mizos use baskets with locking arrangements for stroing ornaments and clothes. (Handicrafts India, 1994). In Assam the sieves and the winnowing fans are so exquisitely done as to make them a work of art.

In south India too, the craft of cane weaving has developed to produce some of the most intricate works of trays, flower baskets, shopping bags, folding fans and toys. In Kerala, pine leaves and Kora grass are used to make baskets.

Bamboo root carving: Bamboo root craving is a rare craft. Certain species of bamboo grow in club formations. These roots are kept under water; once the sap is drawn the sculptor shapes the roots to what suits him best.  This form of craft is famous in Tripura, and Manipura.

Carpets, Namdhas, Durries: The history of Indian pile carpet begins in the sixteenth century. Indian carpet weaver ties his knots with great skill and dexterity on upright wooden looms. Traditionally, no use is made of any mechanical device except for the the chhura, a curved steel knife, and a panja or comb made of iron for beating in the weft and the pile tufts are used.

Kashmir is known for its very fine quality carpets. An average carpet in this region is made with 324 knots per square inch. Other centre where the carpet industry has historically floushied are Amritsar, Agra, and Jaipur. However, it is the Mirzapur-Bhadohi belt with represents the most important area of carpet weaving in the country.

A distinct style of carpet weaving also prevails in the mountainuos areas of India including Leh, Darjeeling, Gangtok, and Imphal.

Durries is a pileless cotton spread wovenin simple strips of different colors. There are two kinds of durries for beds and for floors. Many states especially Uttar Pradesh, Rajasthan, Bihar, Assam, and patches in Andra pradesh and Madya Pradesh are strong centre of this craft.

Embroidery: Embroidery in India is intricate and its aesthetic appeal is unparalled. All over the country emroidery is done on various fabrics. Beads and mica are also used to embellish embroidered  fabrics to give them glitter. Various tradition of embroidery is present in India including:

Kashmiti embroidary; the Phulkari of Punjab and Hayana; The chumba rumals; the Kutch emroidary practised in the Kutch, and Saurastha region of Gujrat; the Zari tradition of UP, and Delhi, the Kasuti style of Karnataka, the Bengal Kantha, and laces of South India.

Ivory craving: Ivory crazing is one of the oldest craft forms in India. Thiruvanathapuram, Dlehi, Jaipur, Berhampur, Janshedpur, Varansai and Amritsar are famous for it, each having its own unique style. Thiruvanathapuram is renowned for its jewellery items, while Lucknow and Amritsar were known for there table lamps. However, given the difficulty in finding material for the craft it is facing a crisis.

Sarees: Apart from being a traditional and popular wear it is also an handicraft. Traditionally sarees are painstakingly woven by craftsmen. Saree weaving is a craft that has transformed and reinvented itsself through  variance of time and space. The size of the saree varies from the smaller four yards to the longer nine yards and can be draped in a variaty of styles.

To learn how to drape a saree in the navi style please click here.

To learn more about the many more handicraft in India please click here.