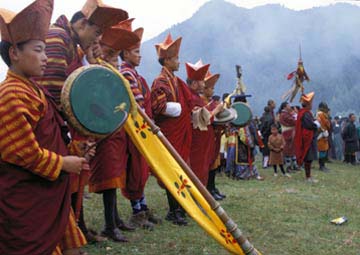 Bhutanese music includes traditional genres such as zhungdra and boedra, and a modern genre called rigsar. Folk music and dance (cham) gained prominence during the reign of Zhabdrung Ngawang Namgyal (1594-1652). Instruments like lingam (flute), dramnyen (lute) and chiwang (fiddle) date back to that time period. Drupka Buddhism and Buddhist music have influenced Bhutanese culture, like many folk songs and chanting styles are derived from Drupka music.

The modern genre of music in Bhutan became popular with the Bhutan Broadcasting Service and the band Tashi Nyencha who established the first recording studio in 1991, prior to which Bhutanese people primarily listened to Indian movie and pop music.  Rigsar which is the dominant style of popular music dates back to the late 1960s and was originally played on a dranyen (a kind of string instrument). The traditional dranyen was updated into the rigor dranyen for use in popular music. The rigsar dranyen has 15 strings, two bridges and an extra set of tuning keys.

The Rigsar’s popularity increased in the 1970s with the development of the genre’s modern form. By the end of 1980s the popularity of rigsar was declining until Norling draying , a very popular and profilic record label released more than 130 albums. With popularity of Norling, Bhutanese music has primarily been the rigsar genre with fusion elements from Western, Indian and Nepali music. New Waves (1996) by Suresh Moktan and Lhamo Dupka is the best-selling rigsar album in Bhutanese history. Jigme Drukpa is the leading Bhutanese musician and musicologist.