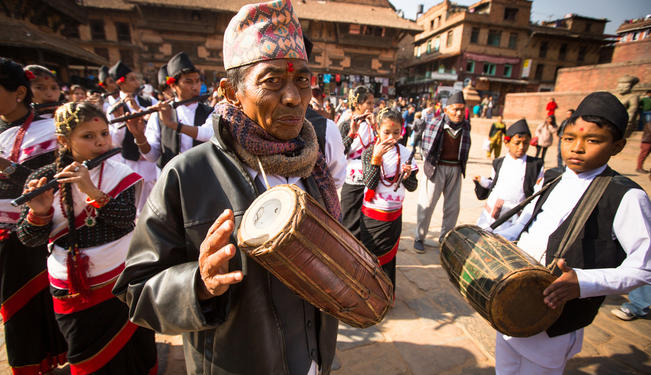 Newari Music: consist of percussion instruments, some wind instruments, but no string instruments. All the castes have their own musical tunes and bands, and there are specific tunes for certain festivals, seasons and even for certain times of the day. Nasadya, the God of artists is revered in all the Newar localities.

Khas Music: belongs to the Khas society where castes like Damai used to play a number of instruments on occasions such as marriages, birth and other important festive occasions. But this tradition is now on decline due to the growing popularity of television, radio and other means of communication.

Musical Instruments: are popular throughout the country, while some are played only locally or on specific occasions. The Sarangi (smallchodophone), played by running a bow over the strings, is made and played by the Gandharvas or Gaines, who are the traditional folk singers of western Nepal. Air or wind blown instruments (aerophones) are found in various shapes, sizes and sound.Sahanai or Panchey Baja are played during weddings. Other instruments played during religious and social functions are Narasingha, Ponga and Muhali. Among the membranophones, Damphu is a double-sided disk shaped drum, with a long wooden handle. The Dhol/Dholak is a double-headed drum popular in the Terai region during public fairs and festivals. Dhimey is a double-headed cylindrical drum with a big wooden body, popular amongst the Newars of the Kathmandu Valley. The most popular drum is Maadal, made of leather with a wooden body is widely used for folk music and dances in the hills.