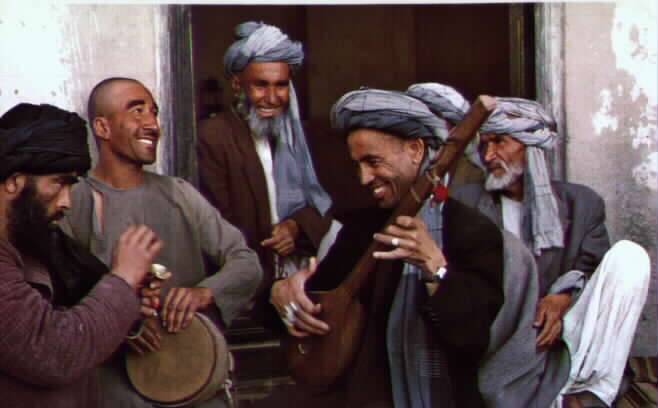 In Afghanistan, music can be broadly represented by traditional folk songs, ballads and dances. Music in Afghanistan is played in the modal scales of India and Persia. Moreover, Afghan music is both modal and melodic, that is, it is played in free-rhythm or rhythmic sequence in 4/4, 6/8 or more commonly 7/8. Herat style of music is Chaharbati (meaning four), which is played and sung in free-rhythm. Introductory improvisions called shakal are common in other areas of the country. Pashtu, Logari and Kabuli music are usually performed in patterns of alternating passages of fast rhythmic and medium or free-rhythm sequences. The attan dance which is the national dance of Afghanistan is derived from Pashtun areas and is performed in a large circle with the dancers clapping their hands and quickening the movements of their feet to the beat of the music.

Afghans enjoy music by playing many types of instruments including- mini harmonium, santur, chang (like a harmonica), rubab (6 stinged instrument), table, sitar, zurna, flute, dayereh and tanbur. Rubab is the native instrument of Afghanistan. It is a plucked instrument with a long deep xoundbox hollowed out of mulberry wood and covered with skin. In Nangahar area of Afghanistan, an archaeological find demonstrates that the rubab has been in existence from at least 2,000 years. It is said that from rubab, Indian sarod and Western violin and cello have developed.

Music is played and enjoyed in the tea house or samowar which has been the local gathering place. Due to some negative associations on public performances of music indicated by Islam, Afghan instrumentalists usually insist that they perform as a hobby (shauqi) and not as professional entertainers (kespi) which would place them in a very low stratum of society. Playing as shauqi in a samowar does not interfere much with religious interdiction.