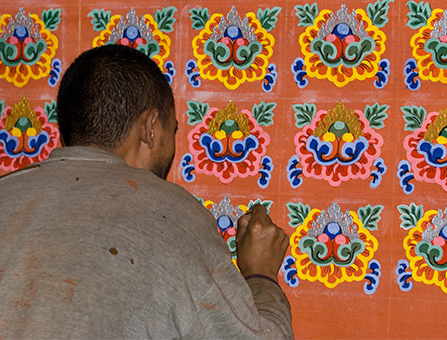 In Bhutan sculpting or jim dzo is one of the oldest forms of carft originationg in the 17th century. Clay statues, paper mache, clay masks and pots are examples of jim dzo.Bhutanese Clay sculpture is among the best in the Himalayan region and many gifted sculptors were invited to build statues for some of neighbouring Tibet’s ancient monasteries. In Bhutan, towering clay statues of Guru Rinpoche and Zhabdrung Nawang Namgyal are central figures in more than 2,000 monasteries all around the country. All the clay sculptures are religious in nature and most of the master sculptors are employed full time by the Royal Government of Bhutan. Clay sculpturing skill is one of the skills taught by the National Institute of Zorig Chusum under the Government of Bhutan.

Bronze casting is used to produce statues and pinnacles for roofs and to make decorative ornaments used in monasteries. Both wax and sand casting techniques are used in Bhutan. Traditionally, wax casting of statues of deities was practiced by sculptors.

In Bhutan, carving is done on various materials ranging from stone, wood and slate. Woodcarving can be found in masks, traditional symbols, bowls and cups, wooden sheaths or scabbards and handles for knives and swords, beautifully carved pillars and beams, printing blocks of wood and altars. Slate carving is another popular art and can be found in carvings of images of deities, religious scripts and mantras. Stone carving while not so evident has survived over the years in Bhutan. What survives of this art today are the large grinding stone mills turned by water and the smaller ones used by farmers at home, the hollowed-out stones for husking grain, troughs for feeding animals and the images of gods and deities carved onto large rocks and scriptures.

Throughout Bhutanese history, the art of embroidery or tshemzo has played a very important role in the making of thangkas and other decorative clothes like rachus (women’s ceremonial shoulder scarves) and triceps (ceremonial table cover). Traditionally, only men were involved in embroidery and applique work, though now women are also learning this craft.