Sri Lanka has a rich traditional dance system around the country; Upcountry Dance, Law country Dance and Sbaragamu Dance.  These three forms of dance are unique to Sri Lanka which are formed in the various parts of the country as their names depicts. Upcountry dance originated in hill country specifically with the rituals of the Sri Dalada Maligawa. The upcountry dance itself practice in the Kandy Perahara (Pageant) which takes place every year in Kandy. Law Country dance originated in down south of Sri Lanka called Pahatharata Natum. The Sabaragamu Dance belongs to Sabaragamu Province of the country. The three forms of dances are closely related to the life of the Sri Lankan folk and they are used to perform in special occasions of the peoples lives.

Udarata Natum or Upcountry Dance as it names it is derived in hill country. Therefore, it is called Kandyan Dance. Though its origin is in Upcountry, the dance form is practice all over the country. The upcountry dance form is mostly performed in the open air. This dance is performed as an offering to the gods. The dance is followed by  Gata Beraya and reciting  of blessing hymns. There are a series of rituals in the Kandya Dance to invoke blessings for the people. Kohombayak Kankariya is a famous ritual in the upcountry dance. The majestic Wes Dance attract the audience for several minutes. The Wes Dancer with the glamour of costume represent the Mahasammatha King, the first king of the world.

Pahatharata Natum
Pahatharata or Law-country dance is also a special Sri Lankan traditional dance form practiced all over the country. As the name of the dance says it was originated in down south of the country called Pahatharata. This form of dance also has its own identity as upcountry dance style. The same system is followed to form the dance form with ritualistic based to bless the people and the country. The dance is followed by pahatarata bera (drum) and hymns invoking blessings. It is mostly involved with rituals in healing to the inhuman characters such as devil demons and dead.  The Kolam dance makes the audience smile and heal their mental and physical illnesses.The dance Thelme is one of attractive dance which invoke blessings showing the strength of dancers. 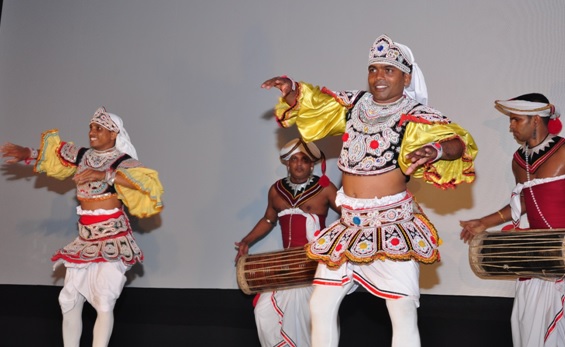 Masks Dance
The masks dance is famous in down south with the law country dance tradition. The dancer wears different kinds of masks to show the character to the audience to attract them. There are three kinds of Masks Dances.

This picture is a famous Mask Dance to invoke blessings for the diseased people.

These performances are rare on stage and the rural villages hold during their special occasions. 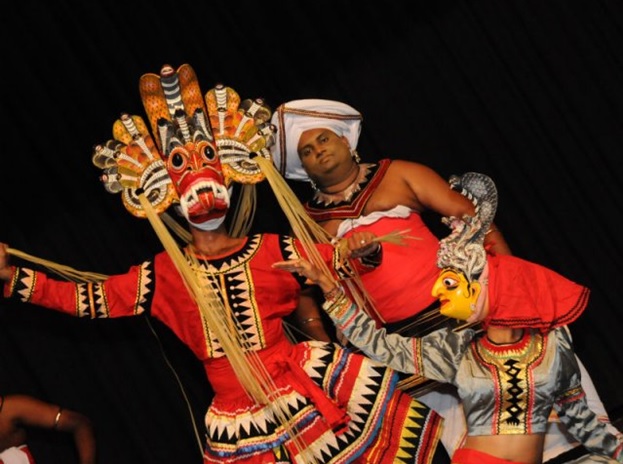 Sabaragamu dance is originated in Ratnapuara where the Shrine of god Sumana Saman is situated. The dance form is specialized for the rituals related to the God Sumana Saman. This dance form also has a special drum called Daula. The dancers wear colorful costumes for the dance  and recite  hymns praising to god and invoking blessings for the people and the country.

The dance form itself is a combination of upcountry and law country dances with specialized distinctive costumes, songs, chants, drums, and rhythms of Sabaragamu culture. Both male and female dancers perform at the rituals and festivals dedicated to the invoking blessings of the God Sumana Saman.